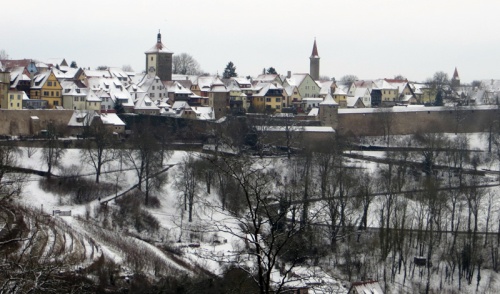 And something called the Schneeball.

One of the many enthralling Rothenburg gates, which give the town an almost Disney-like feel.

“Unworthy of the heavy promotion they receive, Schneeballen are bland pie crusts crumpled into a ball and dusted with powered sugar or frosted with sticky-sweet glop.” (Rick Steves’ Germany 2011)

A Rothenburg cafe, modern and cozy inside, with delectable treats under glass.

Schneeballen are in the windows of bakeries all around town, some coated in chocolate, others plain. I liked the snowy look of the ones powdered with sugar.

We found an elegant cafe by the Market Square and settled in to try one for ourselves. 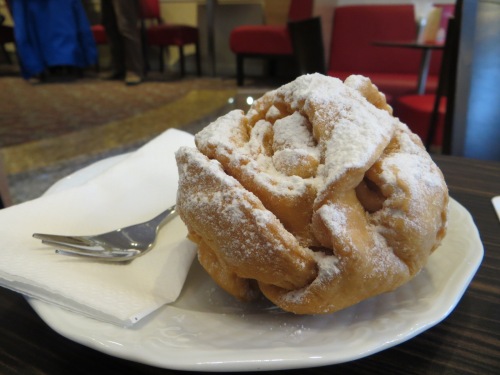 A Schneeball, dusted with powered sugar.

And, well. If you are a pie-crust fanatic, you will be in the land of bliss.

But otherwise: Rick is right. It’s rather crisp and dry, not very tantalizing. I wouldn’t order one again.

Maybe the chocolate variety. Just to be sure.

The best use I found for the pastry bits, once broken apart, was to dunk them in tea like a springerle cookie. Most every hard and purportedly sweet German treat is better softened in tea, warmed up and dreamy.

A cheese-ham croissant and a springerle cookie, imprinted with an elegant bird.

But even then, the schneeball is not truly ideal. This cafe also sold its own springerle cookies, which were beautifully imprinted with detailed animals. And even better dunked in hot tea.

Rothenburg clock man, at right, just downed his mug of beer to save the day.

Outside the cafe, in the Market Square, the Meistertrunk story is re-enacted regularly by the figure on the square’s clock tower. Legend – apparently unfounded, but a nice tale fit for tourists – has it that in 1631, the mayor saved the town from invaders by meeting an army general’s dare and drinking an entire three-liter mug of beer in one gulp.

And so, on the hour most hours starting at 11 a.m., the mayoral figure lifts his beer mug to the delight of the watching crowd.

About as exciting as a ball of pie pastry. 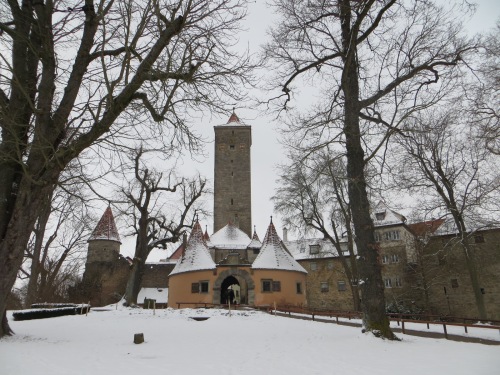 Rothenburg in the snow, a fairytale town.

Still, I wouldn’t skip these little tourism routines. Each town has its own scripts and props, an adorable formality of hospitality on the travel circuit. The oddity brings a light thrill of its own.

And altogether, Rothernburg ob der Tauber was enthralling, a fortress in snow white high above the rushing river. Visiting out of season means watching the museum/church times closely and missing the night watchman’s tour. But what you get in return is a mystical stillness, like walking through a storybook setting, where the only snowballs are edible.