This may be a little late, but I’m taking solace in the handy fact that the Christmas season truly lasts until January 6, the Epiphany.

But what were they for? I couldn’t tell at first. Were they for wax creations? Paper prints? 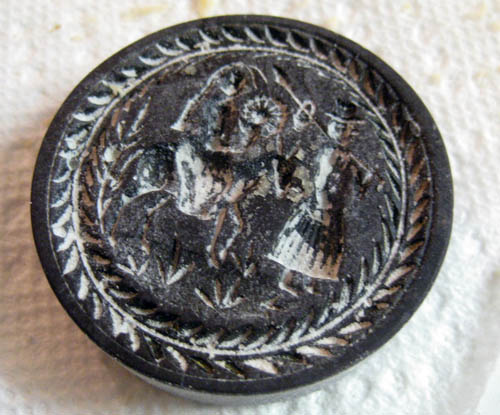 In a deliberation mode of locals, we bought a 2€ cookie to try. It was beautiful and elegant, but was it edible? Springerles, as these cookies are called, are hard and dry, completely unappealing solo. But dunked – rather, soaked for a good 4+ seconds – in a cup of hot tea or coffee, they give way to soft, delectable sweetness laced with anise.

So you can guess how this adventure turns out. My only hesitation was that I wanted to substitute the anise  for some other flavor. Maybe lemon or almond? 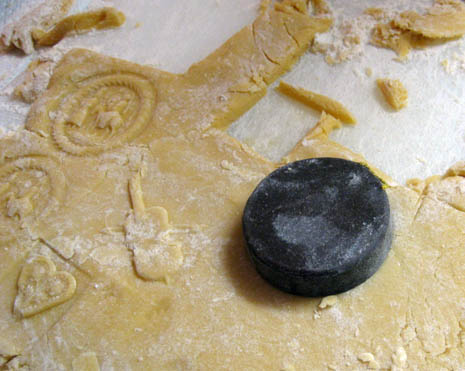 I went back to the market a few days later and bought a collection of springerle molds: little Biblical scenes, a hairy camel, a violin (or is it a cello?), a pretzel, a heart, and an enormous Saint Nicholas. In Germany, St. Nick is still a bishop with a croiser, rather than an elderly bearded man with a bulging sac of toys.

The prices were all over the place. A small mold might be 2€. A larger one made up of many little molds could run north of 50€. 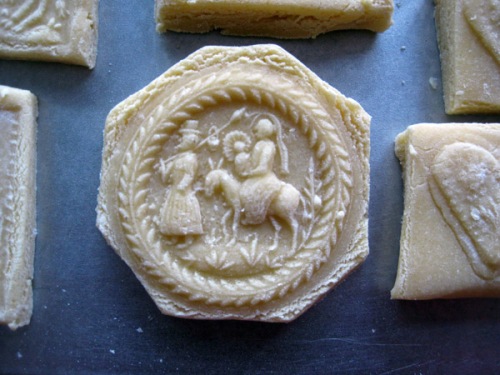 Springerle cookie with Mary, Joseph, Jesus and a donkey

We tried the Joy of Cooking instructions and ended up adding heaps of extra flour. As written, it was too sticky for me. The dough kept climbing into the molds’ crevices and refusing to leave. Only after two of us wrangled the dough into a floury submission did the imprints start to emerge. But goodness. They are so much more gorgeous than American cookie-cutter creations. 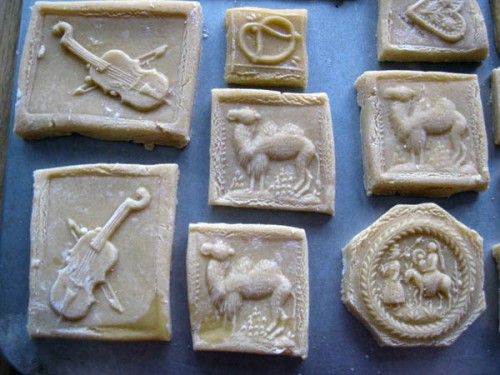 Assorted springerle cookies, including a camel, a pretzel, and a violin

I did substitute almond extract for the anise, which blended into the recipe nicely. But the rest of the recipe was a mystery to me. Eggs, but no butter? Flour, but no oil? Also: You must rest the dough, once molded into cookies, for at least 10 to 12 hours. Not in the refrigerator – out on the counter. 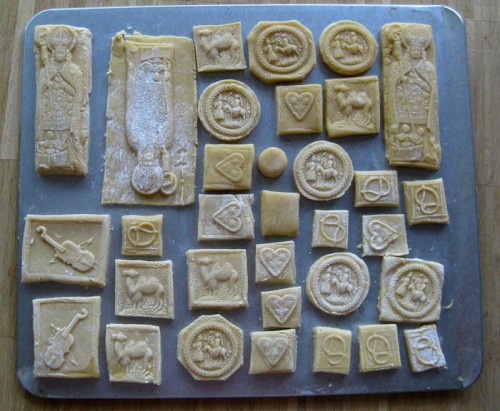 I’ll post a recipe when we find one that works without so much haggling. After all, with heart-shaped molds, I imagine these could be pretty Valentine’s Day cookies, too …

Don’t ask how it happened. I don’t really know. But I somehow seemed to have missed the part of growing up where you learn how to make coffee. And the part where you buy your first coffee maker.

This month, I finally bought my first coffee contraption – at age 30-something, on the eve of our friends’ visit. (House guests are the key to making so much go from rumination to reality.)

I was waffling between the ordinary drip coffee pot (cheap, hulking, the usual starter appliance) and the French press (cheap, slim, fussy to clean). Both could produce adequate coffee, though nothing like the strong stuff I’ve come to crave in Germany. We’re expats at the moment, and anything bought with a cord is perishable. A fancy expresso machine seemed unreasonable, and though some friends have trekked their beloved Keurigs across the Atlantic and attached a hefty voltage converter, that seemed a bit much to me. (I’m a coffee novice, clearly.)

But it turns out there is another option. No electricity required. No throw-away filters. Stronger than your average American brew coffee. Simple to clean. Shiny and cute. And less than $40.

I present to you: the moka pot. 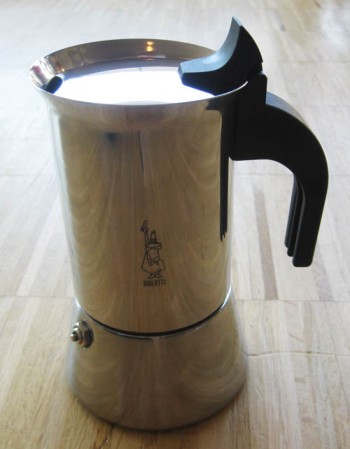 You might not recognize this little pot, but you’ve probably seen him before – looking more angular. The original moka pot was patented in the 1930s. It’s still made today in aluminum by Bialetti.

One more, please! Apparently, the little Bialetti man is a caricature of the company founder’s son (Wikipedia)

This particular version is made of stainless steel, which I read was better – at least in some ways – because it doesn’t impart the taste of aluminum. And it’s friendly to all types of stovetops.

The bottom half holds the water and a little removable compartment of ground coffee beans. Once the pot boils, delicious espresso bubbles up into the top pitcher-like half. 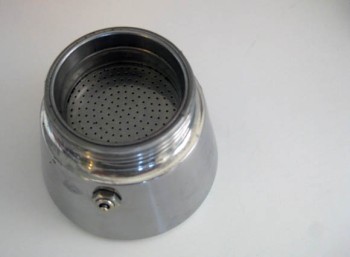 Where the ground coffee beans go 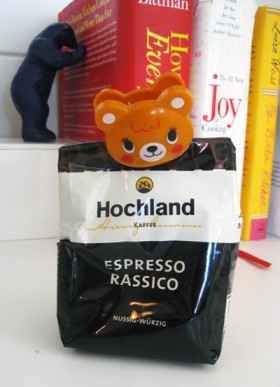 Our current espresso beans from Hochland. Yes, we like bears. 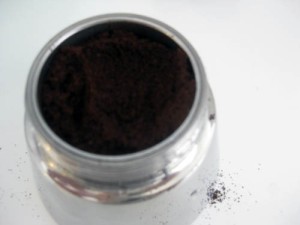 I made the mistake of leaving lots of room in the coffee compartment, because the instructions warn against packing it too tightly. But our visiting friends (experienced coffee connoisseurs) showed me the way: If you want the strongest brew you can get, you have to fill up the little cup as much as you can. 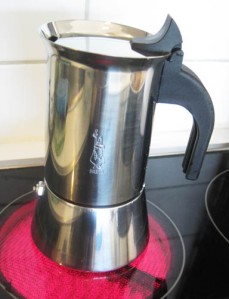 Please don’t leave me. I like to be watched.

Then screw on the top part and set it on a burner. I had to experiment with temperatures, because I started way too low. Turning the knob to medium-high (about 9 o’clock) works well for my stove, but I’d suggest starting lower to find your stove’s sweet spot. 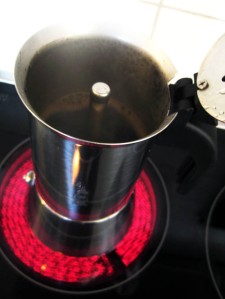 After a few minutes – maybe 4? I should time it – the water begins to rustle. A minute later, it will start percolating up the spout and spilling over into the top compartment. From that point, it takes little time at all. (Sometimes, I’ll just turn off the burner at this point. The residual heat keeps it going.)

I love the gurgling sound. It rises to a growl, which reminds me of a tea kettle. So organic and pleasant. When you hear the growl, pull the pot off the burner. 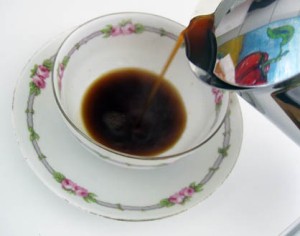 Sweet taste of near espresso. Call it super coffee.

The taste is so much stronger than a typical drip pot of coffee, a big jolt in the morning. And bonus: Once the pot cools, just rinse the three parts and set them aside to dry. No soap recommended!

The only downside is that I bought the 4-cup version. 4 cups ≠ 4 cups. “4 cups” = 50 ml times 4, or 4 pseudo-espresso shots. Oops. This meant that we made 5 or 6 or 7 “pots” of coffee during each breakfast with the four of us. On the upside, the brew was tasty enough that our friends sought out the Hochland beans to take back to the States.

Next up: Foaming milk to make a cappuccino. Any recommendations?

They say you taste first with your eyes. 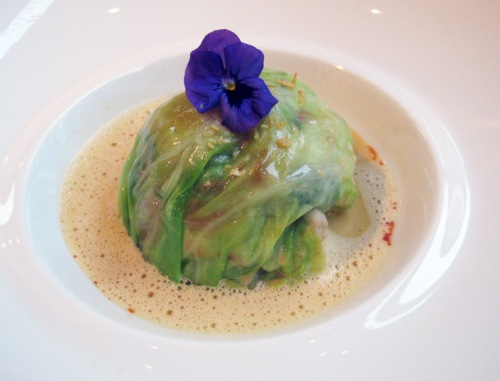 This is one of the prettiest dishes I’ve ever been served. But not the tastiest. The cabbage dome hides a collection of super-chewy shrimp and dull white sole. The delicate peach-colored froth is lobster foam, luscious but not exceptionally flavorful. The sea doesn’t lap in your mouth. The cabbage falls apart like soggy paper, difficult to cut into bites.

I didn’t try the violet.

For a fancy lunch, Fischers Fritz in Berlin has two Michelin stars and menu prices that won’t completely slay you. But it got me thinking about presentation, about prettiness, about all the little touches that make a meal extra special. 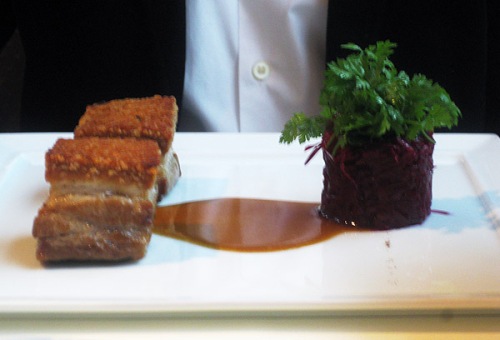 This land-lover’s entree of pork belly and cabbage is nice and tidy. See that purple muppet of deep maroon cabbage with the fluffy herb hair? My husband couldn’t stop devouring it. Sweet and vinegary, it dissolved in your mouth in a tingle of flavors. The pork belly played the heavy crispness against the nearly liquid pork fat. It reminded us of lechon, which, in the Filipino food lexicon, is a compliment of the highest order.

Our appetizers were on another level. I loved my eel bar, a thin strip of minced smokiness frosted with cream cheese-like horseradish icing. The flavors were lovely enough, but the playfulness of the underwater scene, decorated with dill weeds and fans of apple crisps, made me smile. I waited for a mermaid to emerge.

I hadn’t thought of playing with dill in such a way (which didn’t, I should say sadly, contribute much beyond a clever stage prop to the dish, leaving an awkward grassy texture on my tongue). Visually, the herb made me consider a whole new line of options. Trees of rosemary. Fans of basil. Clover fields of oregano. 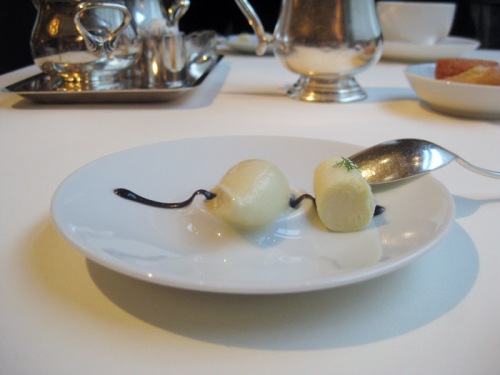 We didn’t order dessert, but one of the pleasantries of a place like Fischers Fritz is little surprises from the chef. I wish every meal ended with a dollop of sweetness. This pineapple mousse and ice-creaminess dollop danced on my tongue. Delicious.

Could it ever be proper to serve such a sliver of sweetness at a dinner party?

Maybe the surrealist squiggle of sauce would give me permission. 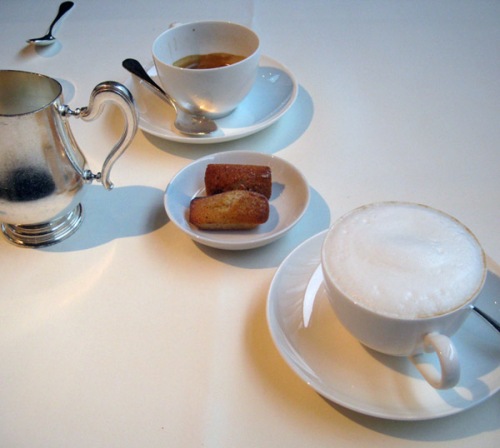 Before we headed back out into the damp Berlin chill, we fortified ourselves with warm mugs of caffeine. With them came doll-size loaves, lemon poppy-seed confections that featured a wonderfully mighty crust and a divine cake interior.

These humble knobs of cake weren’t much to gaze at, yet they were one of the most delicious bites of our lunch. Looks only go so far.