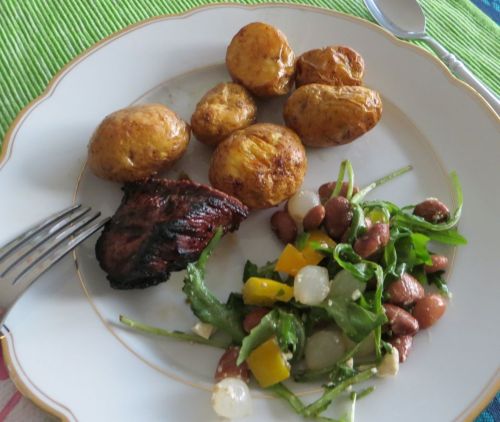 A throw-together salad for moving day

We’re in the midst of moving right now, caught in “stuff” purgatory.

The movers came earlier this month, blew in with rolls of corrugated, laminated cardboard and heavy-duty packing-tape contraptions. They wrapped and boxed and piled and disassembled. They erected a lift, a sort of open-air amusement park ride, on the sidewalk in front of our apartment, and our furniture rode slowly in shifts down to the moving van.

I watched, helpless. It is nearly time to go, and our things need a two-month head-start to voyage across the ocean.

And so, there went my kitchen. My beloved pots, my Dutch oven, my good knives, my baking gear. Bye, spatulas! Tschüss, pepper grinder! See you later, pasta maker!

(The fridge, stove, and oven stayed put – thankfully. In Germany, appliances and even cabinets typically accompany a resident from apartment to apartment. The entire kitchen is considered part of your furniture. But we have an unusual American-style built-in kitchen, ready for the next expat.)

Now we’re down to loaner furniture until move-out day.

And a little loaner “kitchen kit” that’s been a god-send.

We’ve got four dinner plates, four glasses, four bowls, utensils, a cutting board, three pots with lids, a can opener, a vegetable peeler, and – my favorite; I nearly gasped when I saw it in the big black locker – a Pyrex casserole dish. A magic wand in the kitchen. You can do nearly anything with a big, rectangular glass dish. Brownies. Roasted chicken. Baked potatoes. Lasagne.

We joke that we live in a dorm room. It’s college for the third time.

Perhaps I shouldn’t be surprised, but the void is oddly pleasant. The freedom of life with less things. The illusion of starting over.

It feels almost like camping. We’ve been creating make-shift, disposable substitutes to replace useful items that have left us. Glass jars salvaged from our recycling bin became toothbrush holders. A liter plastic water bottle cut in half turned into a vase. A plastic lid is now a soap dish.

Last night, we made dinner in our new minimalist apartment. I roasted potatoes in the Pyrex dish and created a hodge-podge bean salad out of our cabinet leftovers. My quest now is to get through all our pantry staples before we leave. Today’s victory was finishing a soy sauce bottle, a balsamic vinegar bottle, and a jar of cocktail onions:

The bean salad came out better than I expected, so I’ll share it here. I liked the bitter notes of the arugula against the savory beans, the acidic, sweet onions, and the creamy feta.

It’s barely a recipe, and completely subject to whatever is in your pantry.

Do you have a throw-together salad you love?

Drizzle with balsamic vinegar and olive oil, to taste. 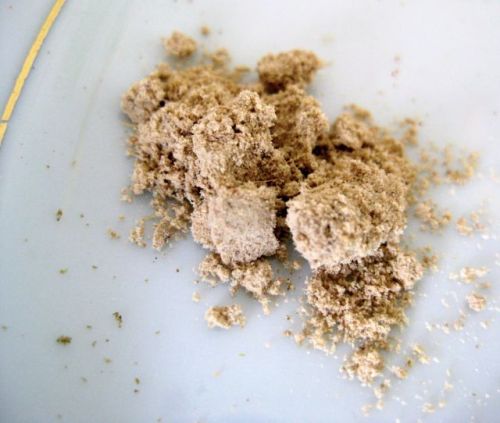 For a beginning cook, herbs and spices are extraordinarily mysterious.

Those unassuming leaves contain so much potential to turn a dish from mediocre to magical.

But how? Cooking with herbs and spices once to me seemed like a form of alchemy.

The other day, I was at a friend’s home when she invited me to sample the herbs potted prettily on her deck. “Try the marjoram,” she said. “It’s pretty hot!” I plucked off a tiny rounded leaf and chewed it.

The leaf hit me with a blast of pleasant spiciness and tang.

“That’s oregano!” I blurted out.

She looked baffled. “No, I’m sure I bought marjoram.”

I looked down at the leaves, little club-shaped clusters. I didn’t know what marjoram looked like, but I did know oregano looked an awful lot like that.

These are not oregano leaves or marjoram leaves …

Who knows if I was right and the label wrong – no herb judge could be located – but I was surprised by how certain my taste buds were.

I couldn’t have identified any fresh herbs 15 years ago. I couldn’t have told you what an oregano plant looks like. I hadn’t ever chewed a raw oregano leaf.

I love moments like these. These little markers, I imagine, serve to remind us grown-ups that we’re on a path and we’ve stepped some  indiscernible, otherwise unnoticeable distance. It doesn’t matter so much if we ever get there – for there is no there there– but that we’re moving and learning and understanding a little more, with one more leaf, one more taste.

Think of it as the adult equivalent of a sticker or a level up.

Later that day, my friend texted me:

“I think you are right. It’s oregano.”

Here are five things that helped me learn more about spices and herbs. Perhaps they’ll be handy for you, too.

I wish you could catch a whiff of tantalizing sweet licorice from these fennel seeds.

5 Aids on the Spice Route

1) Your sniffer. When I’m at a loss for what spice to use, sometimes I start unscrewing lids and sniffing my spices. Sooner or later, one smells exactly right for whatever dish I’m making. My nose knows. It feels so unscientific, but I think of it as training myself, making the lines connecting spice to dish more instinctual.

2) “The Flavor Bible.” If my nose fails at the flavor puzzle, I turn to “The Flavor Bible.” Each ingredient  – ordered alphabetically – is followed by a list of compatible flavors. The best matches are in all caps and bold; other very good matches are in bold; etc. The lists give me both solutions to ingredient shortages and ideas to broaden my use of herbs and spices.

3) Lessons at restaurants. Restaurants that emphasis eating local are treasure troves for the curious cook. I like to pay attention especially to fancy salads, unusual dishes, and seasonal specialties. What is that odd bitter leaf? What is that lovely edible flower? What is that nut unlike any nut I’ve seen before? I take a photo, make notes of its shape and texture and taste, and look it up later online. Or better yet, ask the cook.

4) Cooking outside your comfort cuisines. These days, I’m exploring more Indian dishes, getting familiar with curry powder, ground coriander, garam masala, amchoor powder, cumin, etc. From Hungarian recipes I’ve learned about the wonders of paprika; from Lebanese recipes, the glory of za’tar. Then I can transport those spices to other favorite foods, mixing and matching.

5) Investing in new spices. I learned the sad way that you can’t cook great Indian food by through North American substitutions. Nutmeg does not equal cumin. A splurge on new spices, for use over and over, is rarely more than what one drink would cost in a restaurant. I sometimes remind myself what a cooking class costs, and then a new $5 bag of exotic spice and its built-in mini lesson seems like a bargain.

How do you learn more about herbs and spices? Which ones should I try next?