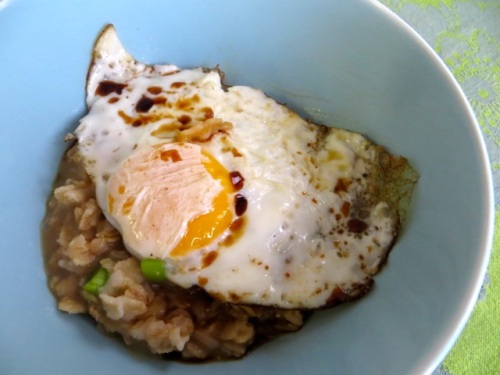 I’ve come around to oatmeal again this winter, this blustery, late-bloomer of a winter that’s been littering feathery snow every other week, closing down school and work, painting the trees outside my window an elegant gray-white. Another snow flurry fest is supposedly on the radar, despite the official arrival of spring days ago. Jack Frost did not get the memo. 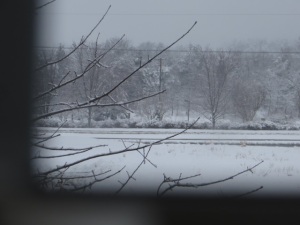 So oatmeal. Oatmeal feels cozy, safe, consoling, like Goldilock’s porridge but with better marketing. I’d put it in the same family of comfort as rice and polenta, the same trend bucket as pomegrante and avocado. It’s both quick and forgiving: five minutes flat of simmering with water or milk, and an extra minute or two won’t hurt, a necessary buffer in the chaos of morning preparations.

I like oatmeal sweet: a tiny downpour of maple syrup, a dusting of cinnamon, allspice, nutmeg, cardamom, a stir of fresh or frozen berries. If I have time, cooked apples or pears with cinnamon forms a sort of deconstructed breakfast pie.

But even better: savory oatmeal. A bit salty, with a fried egg on top, the golden yolk streaming into the oatmeal like a godly sauce. (I was skeptical, as you might be, but it meets the logic test. And, well, does not rice worth both ways? Rice pudding and rice with savory curry, say?) And, as with rice, a squirt or two or three of fish sauce adds an excellent umami punch, if you are fish-sauce inclined. (We are.)

(doubles nicely, but you may need to simmer longer than 5 minutes) 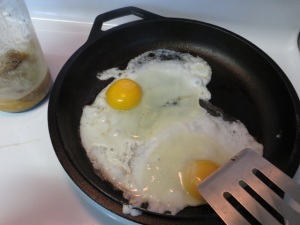 Add the oatmeal to boiling water, reduce heat to a simmer. Add scallions.

Simmer 5 minutes or until it reaches the consistency you like

Meanwhile, slick a frying pan with a bit of bacon grease (or butter or olive oil) on medium-high. (Yes, we’ve started saving our bacon grease; it’s delicious and thrifty! Once it cools just slightly, pour it into a jar and store in the fridge.) Crack in the egg and fry to your liking.

Stir soy sauce into the oatmeal. Scoop into bowl. Top with fried egg and dot with extra soy sauce, if you like. Stare out the window, sink your spoon in, and count the snowflakes drifting down.

And chocolate chip cookies are the ruling monarchy in his kingdom. No nuts. No peanut butter. God forbid you want to toss in white chocolate. And don’t even think about adding coconut flakes.

So, I get this. And every so often, I’ll make a patch of chocolate chip cookies just for him. Because I love him, and because nothing else food-related (except for maybe brownies or champorado) makes his face light up so brightly.

But then I make a batch for me. 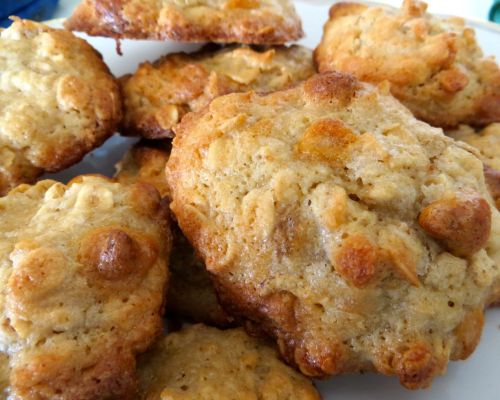 They are a variation of Mark Bittman’s lacy oatmeal cookies, which have no flour. Mere butter, sugar, oatmeal, those bake meltingly into crisp discs of sugar. That’s a bit too saccharine for me. So I add back in a 1/2 cup to a cup of flour. And butterscotch chips.

Add an egg to melted butter and oatmeal and stir … 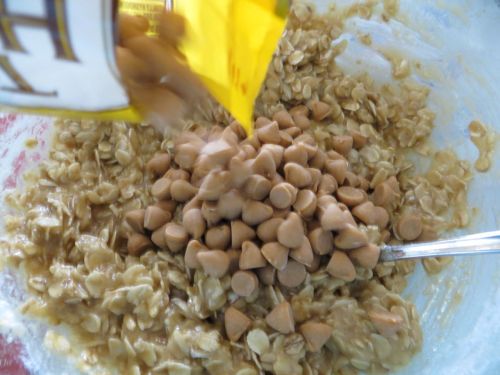 … don’t forget the butterscotch chips. They make all the difference.

Adapted from Mark Bittman’s “How to Cook Everything”

Preheat the oven to 350F degrees. Grease a cookie sheet.

Mix all ingredients. A spoon (plus maybe a fork to whisk up the eggs) is fine. No electric beater necessary, though if you need to justify a vehicle for extra licking, I understand. (If you do use a beater, I would still stir in the chips.)

You will be as tempted as I to scoop them off the cookie sheet immediately, but let them rest for a minute. They need to crisp up, or they’ll fold up and collapse when you slide them onto a platter. (If one goes straight into your mouth, of course, collapsing is a bonus perk!)